First, I make a distinction between Stoicism and Stoic Materialism. Then, I use some real-world examples to show the consequences of the latter contradict the values of the former. I argue this is a problem in practice as well as in theory. I do so by comparison with an analogous case, that of Buddhism/Hinduism and mindfulness. Lastly, I propose some inoculations/antidotes for Stoic practitioners who wish to avoid the trap of Stoic Materialism.

Ego is able to convert anything to its own use, even spirituality.
- Chögyam Trungpa, Cutting Through Spiritual Materialism

According to the Stoics, the only good/desirable thing, is a virtuous character. All their theory and practice, are in one way or another, in service of this primary goal.

A Stoic would encourage you to ask the question: “How may I act Stoically, that is virtuously, in my X?”. X may be relationships (family, friends, romantic, sexual, professional), career, education, finances. They would cringe if you asked “How can I use Stoicism to advance in my X?”. Distinguish the former, Stoicism, by calling the latter Stoic Materialism.

For the rest of this piece, I’m not actually going to argue in favour of Stoicism over Stoic Materialism; that’s a piece for another time. Nor am I going to provide a Stoic rebuttal against MLK Jr’s idea that the ‘drum major instinct’ should not be extinguished, but instead directed towards the right causes. Instead, what I wish to encourage is honesty and caution. Basically, if you are practising Stoic Materialism, whilst pretending to practise Stoicism, then please, don’t bullshit yourself.

Examples of The Distinction

To make things more concrete, let’s go through some of the examples of X that I laid out above. We shall see how this subtle distinction between Stoicism and Stoic Materialism has huge ramifications. Thankfully, Pigliucci has written about this at length, for three examples: “$toicism”, “Broicism” and “stoicisM”. I refer the reader to the modern master himself if they wish to learn more beyond the below summaries.

I now invite you to examine your own life. Ask if there are any ways your application of Stoicism may be similarly misguided, and thus undermining the fundamental Stoic pursuit of a virtuous character. If so, there’s no shame — none of us are sages. Finding such a thing could actually be a great opportunity. You could use it to learn how to proceed deeper with your understanding and application of Stoicism.

A Problem in Practice?

A sceptical reader might grant Stoic Materialism could a be problem in principle. Does this mean it is such in practice?

I don’t know. We should conduct some research to find out for sure. Tibetan Buddhist teacher Trungpa warns his students of such a diversion in Cutting Through Spiritual Materialism:

“Walking the spiritual path properly is a very subtle process; it is not something to jump into naively. There are numerous sidetracks which lead to a distorted, ego-centered version of spirituality; we can deceive ourselves into thinking we are developing spiritually when instead we are strengthening our egocentricity through spiritual techniques.”
— Cutting Through Spiritual Materialism, Introduction

His teachings actually served as the basis for an indicative paper into links between spiritual training and narcissism. [I say merely ‘indicative’ because psychology is notoriously plagued with unrepeatable results. Famous examples, such as the marshmallow test, will-power depletion, power-posing, smiling to feel better, have not been replicated.] In it, they measured many aspects of the situation: 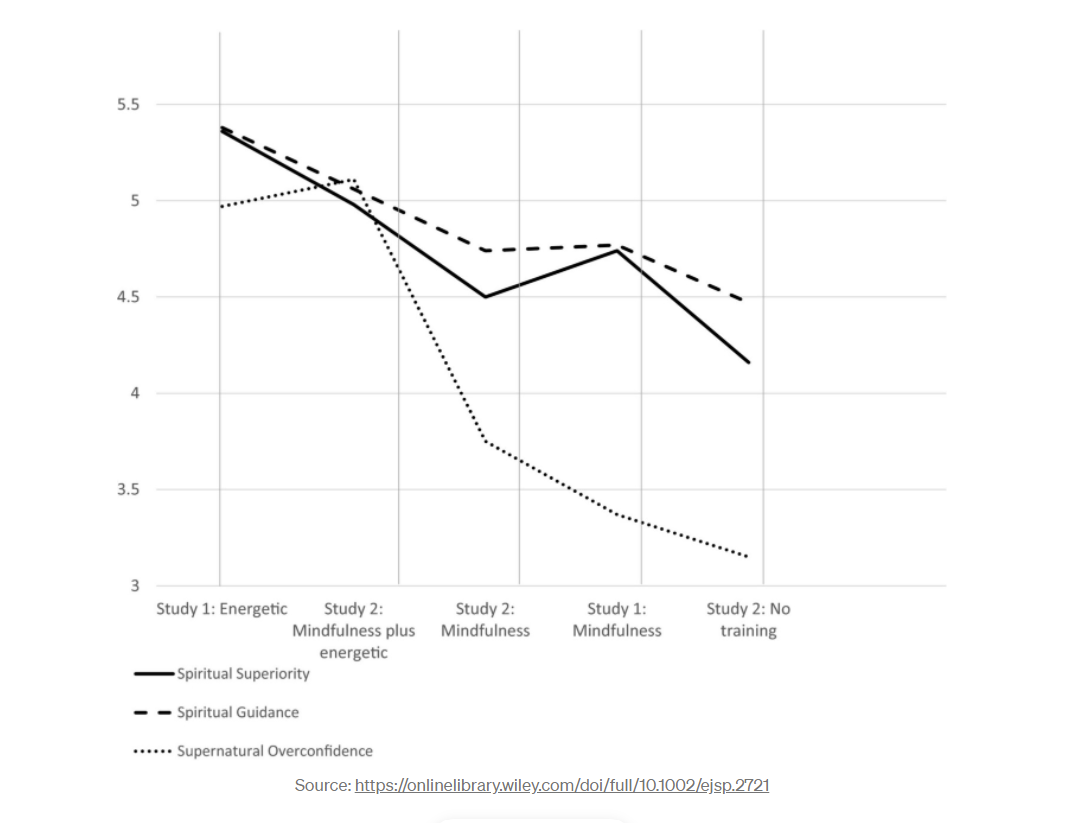 You could reasonably argue that someone who trains in something is actually likely to be ‘better than average’ than someone who does not, ego or not. You could also assume similarly that the desire to help or teach others need not be egoistic. However, the correlation with communal narcissism suggests that there is an egoistic tendency at play. As for basing self-worth on spiritual progress, the authors say this:

“This suggests that basing one’s self‐worth on spiritual progress is associated with the usual self‐serving distortions, thus producing spiritual self‐enhancement.”

Correlation does not imply causation. And if there were causation, the authors “speculate it works in both directions”:

“ On the one hand, spirituality can be seized as a way to bolster the self, allowing one to see the self as very special […] Conversely, spiritual training programs may attract people with strong personal development motives, related to our western narcissistic culture. […] In line with the current “me”‐culture, they develop their own personal religion. This self‐importance […] may be particularly appealing to both overt and covert narcissists.”

We have to remember why this is important: this is literally the opposite what spiritual training aims to achieve. According to the authors:

An underlying theme in all spiritual training […] is that they reduce attachment to the personal self and ego needs such as social approval and success […] extending one’s perspective beyond the self. Ironically, however, spiritual training may in actuality evoke psychological motives and responses that are not enlightened at all […] the road to spiritual enlightenment may yield the exact same mundane distortions […] such as self‐enhancement, illusory superiority, closed‐mindedness, and hedonism (clinging to positive experiences) under the guise of alleged “higher” values.

There are three possibilities for where things go wrong for this result to appear: students, teachers or the philosophy. As evidenced by the excerpts, the authors assume spiritual training philosophies are not themselves flawed. I agree. The philosophies behind mindfulness are not the issue here. Buddhist/Hindu teachings and training completely oppose the self-reinforcing traits discussed above (albeit through different metaphysical assumptions).

This leaves either the students or the teachers as the potential failure points. The authors focus on the nature of the students. I think it also possible the practices were taught incorrectly.

It could be that the mindfulness was delivered without any reference to ego-reducing teachings. This seems entirely plausible to me: mindfulness and meditation practices are typically disseminated as mere techniques, independent of the values of their original context.

I conjecture the above failure points apply to Stoicism too. I welcome empirical research into that statement.

Stoicism, with its emphases on humility and the greater good, is not a philosophy encourages self-reinforcing traits. Teachers of Stoicism therefore have a responsibility to impart values alongside techniques when teaching Stoicism. Also, all sincere practitioners have a responsibility to adhere to those values, including keeping their egos in check.

A friend of mine recently messaged me saying:

Tbh, a lot of the Stoic advice you give me around lust and dating is the same stuff I’ve figured out after 3 years of dating experience, which I see as empirical evidence for the effectiveness of Stoicism.

(Clearly I might rate high on the ‘spiritual guidance’ scale :P)

The key to figuring out whether my friend is progressing in Stoicism or Stoic Materialism, is the word “effectiveness”. Effectiveness towards which goal? From the broader context of our discussion, it was (thankfully) clear that he meant towards ataraxia, a tranquil state of mind borne from the application of virtue to one’s life.

Let’s assume we have empirically investigated Stoic Materialism and found that it exists. It might present itself as narcissism, a lack of empathy, “Stoic superiority”, who knows. What Stoic theory and practice could we use to check ourselves before we wreck ourselves?

In an update of Epictetus’ Enchiridion, Pigliucci reminds us bluntly to not aggrandise ourselves.

“Don’t even think of calling yourself wise, or enlightened, or whatever. To be ostentatious is a sure mark that you are not, in fact, wise or enlightened. Instead of pontificating, act according to what you’ve learned.”
— A Stoic Guide to a Happy Life, #46

In the following, Marcus reminds himself life is short, and to remain temperate, humble and just.

“Take care not to be Caesarified, or dyed in purple: it happens. So keep yourself simple, good, pure, serious, unpretentious, a friend of justice, god-fearing, kind, full of affection, strong for your proper work. Strive hard to remain the same man that philosophy wished to make you. Revere the gods, look after men. Life is short. The one harvest of existence on earth is a godly habit of mind and social action.” — Meditations, 6.30

I would like to sincerely thank Laura-Maria ‘Lori’ Huică for her comments on drafts on this piece, as well as drawing my attention to MLK Jr’s ‘Drum Major Instinct’ sermon.